EDITOR'S NOTE: This article contains several inaccuracies but highlights the end of two capital raising initiatives the company recently completed. Importantly, none of our funding has come from venture capital firms as stated in the first sentence of the article. Additionally, while the company continues to aim to raise a large bolus of capital in two stages to fund the development of our anesthetic program, the figure described in the article is no longer up to date.

Expanesthetics ended its most recent general solicitation offering after raising over $1.3 million in addition to a $445 thousand offering to existing shareholders. This brings Expanesthetics’ total capital raised to date to about $5.5M. Expanesthetics is the global leader in the search for improved inhaled general anesthetics, and also has a program developing non-opioid pain relievers. It will use the funding to advance the company’s R&D and business development initiatives.

A group of CEOs and executives representing nine biotech companies in the greater Sacramento area met on January 16 to discuss ways to overcome the current shortage of high-risk investment capital available for life science enterprises in the region. The group was a subset of fifteen companies brought together by Lonnie Bookbinder, CEO of ARIZ Precision Medicine, who catalyzed the group to allow members to share knowledge and support one another while raising funds and developing their respective technologies.

Northern California pharmaceutical company Expanesthetics announces more than one million dollars in additional funding from existing shareholders. The funding will be used to continue to advance the company’s R&D initiatives and strengthen the company’s growing global collaborations. Expanesthetics is the global leader in the search for improved inhaled surgical anesthetics.

By becoming a Buzz of BIO finalist, Expanesthetics earned the opportunity to present to a large crowd of biotech leaders at the 2018 BIO International Convention in June at the Boston Convention Center. Attendees included venture funds, leading global pharmaceutical companies, and others with an interest in the future of anesthesia drug development from around the world. CEO Mark Holman hosted the presentation, focusing on the vision and goals of the company to bring a new generation of improved anesthetics to the market through a licensed screening technology. Click the headline for the full article. 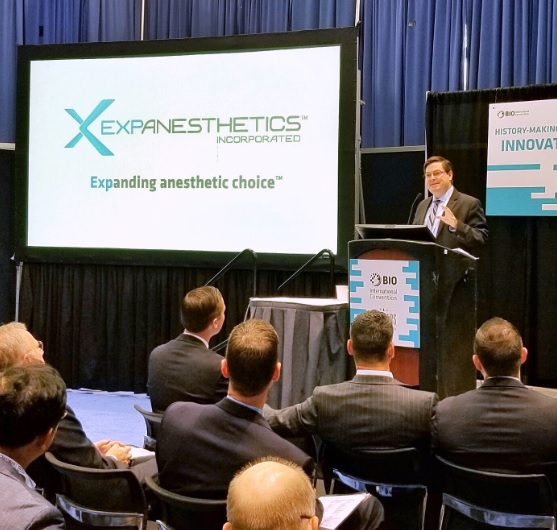